The views and/or opinions expressed herein are solely those of the author, is the author's original work, and do not necessarily represent those of the Montessori Co-op School, its administrators, board or the parent body. The Montessori Co-op School parents’ blog is a forum for our school parents, faculty and staff to share parenting ideas and related issues. Civility in blog posts and comments is required. If you have any questions or concerns, or would like to submit an original contribution for publication, please contact us.

Kids, the Election, and Kindness

Overheard in the backseat…

Funny, sort of. Maybe a year ago I might have thought it was funnier. I don’t know about you, but I am really weary of this political season. What at first seemed like entertainment now just looks like incivility at its absolute worst. I took a breath and said something like:

“Girls, I don’t want to hear you talking like that, it’s not kind. I don’t like Donald Trump, either, but it’s not nice to call him an idiot. One of the things we don’t like about him is that he is unkind–he makes fun of people he doesn’t like and calls those he disagrees with names. We’re not going to do that in this family. So if there’s something you don’t like about his ideas, go ahead and say that. But you need to say it respectfully. We’re not going to be mean or call people idiots.“ 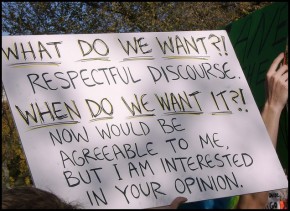 I know that my 9 year old has some knowledge of and concern about his ideas, but, let’s be honest, my 4 year old does not. Where is she picking up this hatred of Donald Trump? I am pretty sure I can’t blame the media on this one, at least not directly. The Wild Kratts or My Little Pony don’t spend much time talking politics. And since they view their shows via streaming services, my kids aren’t seeing political commercials. The only thing I can conclude is that she’s picking this up from the opinions she hears expressed around her. Possibly at school from other kids. Certainly from her sister, this much I know. But I’m embarrassed to admit it’s probably also coming from overhearing her parents talk. And that’s not an implication I like to ponder.

How can we model kindness and civility and treating people with respect (even when we disagree with them) when our children are going around calling people idiots?

I know this problem goes beyond my backseat–I saw a story on NPR this morning that pointed to this very issue as rampant right now. Kids are taking what they are hearing into their own social contexts, and the result is not pretty. And it bears mentioning that it’s not all Donald Trump–there’s plenty of incivility between candidates and their supporters in both parties right now.

It’s only April…and November seems very far away. As we participate in this political season, and as we try to involve our kids in current events and share our political values, how can we parents be more Montessori about that? How can we model independence, self discovery, kindness, and peacemaking instead of namecalling and indoctrination?

Sheri is the mom of Clara (age 4) in Miss Nicole’s room at the Co-op and also 9 year old Lucy, who attends public school.

7 comments on “Kids, the Election, and Kindness”