THIS STUDENT BLOG WAS WRITTEN BY: MYBLOG37

At 9:00 I finished painting my clay Neptune blue. We have things called workplans, a workplan is paper that our teacher writes the works that you try to get done. On my workplan I have a division paper, I have a spelling review, a spelling review is where we review our spelling. The way we get our spelling words is we write a draft. I also had handwriting we have handwriting books I do cursive. I had types of sentences, that is where I wrote all the types of sentences. And I had science. In science we made fluber.

At 1:00 we had art. In art we painted cloth then we brought it outside and put shells, sticks, and pinecones on the cloth that made a sunprint. 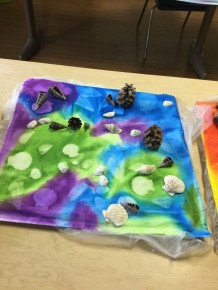 At 2:45 I helped our science teacher clean our class pets cage. Our science class pets are rats. They are really cute.