Upcoming in the Film and Speaker Series

We’re excited to announce the kickoff of our Film and Speaker series for this school year! The first movie will be shown in our school cafeteria on Friday, October 3rd, at 6 pm, followed by a discussion at 7:15 pm.

The movie will be Babies, directed by Thomas Balmes, based on an idea by Alain Chabat, and follows the day to day lives of four babies from birth to their first steps. Afterwards, the discussion will focus on how our environment affects how we parent. Babysitting will be available, but the film is open to both adults and children.

I personally highly recommend this movie – I’ve seen it a few times, and seeing the similarities and differences between the babies’ experiences in the first few months of their lives has made me wonder about my own child’s experiences.

Please click the link below to see a copy of the flier. For more information, please contact the Co-op at 402-345-2001 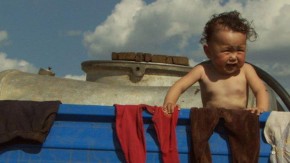 The adventure of a lifetime begins…
Directed by award-winning filmmaker
Thomas Balmès, from an original idea
by producer Alain Chabat, Babies
simultaneously follows four babies
around the world – from birth to first
steps. Babies joyfully captures on film
the earliest stages of the journey of
humanity that are at once unique and
universal to us all